Goran is native of Belgrade, Serbia (in the former Yugoslavia).

Goran started his karate training at the age of 14 (1979) under the supervision and guidance of one of the great European champions Zika Vukojcic. He earned his Black Belt degrees in the following order: 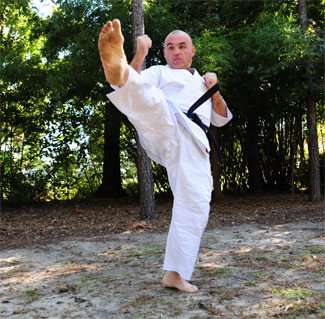 Point Karate
Goran believes that authentic Shotokan karate, if practiced properly, can successfully be adapted to any other fighting style. To test his belief, Goran was traveling from Yugoslavia to the US in order to compete in the top level Point Karate championships. Among his many accomplishments, more significant than others, are the following two:

Judo
Authentic karate that originated in Okinawa Kingdom, long before Okinawa was occupied by Japan, did not consist of only kicks and punches but it also used judo throws and jiu jitsu locks and holds. All those combat techniques were equally important and practiced. As a karate teacher dedicated to teaching his students authentic karate instead of watered-down versions of the art (as it is common today) Goran became a student of judo and in 2017, at age of 52, he started competing in judo competitions. In his first two tournaments Goran has won two medals in +220 lbs. weight class:

In order to win the gold medal at the Georgia Games, Goran had to win two consecutive matches against a judo black belt with 20 years of judo training, who also outweighed Goran by more than 80 pounds. Although only a yellow belt in judo at that time, Goran was able to win both matches with Ippon (submission), which is almost unheard of. Although Goran started practicing judo systematically in 2017, he did practice judo techniques consistently in the past as a part of his Shotokan karate training, which obviously had brought him an advantage against a real judo master.